Memoirs of the Sistahood - Chapter One launches the first of a series of collaborative works between sisters, Becky Beaullieu Valls, a performer/choreographer in Houston, and Babette Beaullieu Wattigny, a sculptor in New Orleans.  Chapter One focuses on female archetypes and the six Beaullieu sisters: Beth, Becky, Babette, Bonnie, Bitsy, and Barbara.  Based on their large Catholic family in South Louisiana, the series fuses the sisters’ individual art work with childhood “sense memories’ of family, home, and religion.

The springboard for Chapter One is the small sculptured alter pieces from Babette’s 1998 exhibit at d.o.c.s. Gallery in New Orleans titled Trinity III, and Becky’s choreographic workWhite Bird, from the 2004 premier at the University of Houston.  The two works shared a common image of females housed in closed structures. To build on this idea, Babette has created life-sized alter boxes of wood and organic materials that represent the complex archetypal patterns of each sister. The sculptures appear onstage to house the dance performers and will be exhibited off stage for audience viewing.

The six boxes were constructed using recycled materials found on the streets of New Orleansfollowing Hurricane Katrina. Windows, doors, wood, and architectural details came from torn down buildings and trash piles. Babette roamed the streets of New Orleans, salvaging materials to build the boxes.  Babette notes, “I would build a box, not really thinking at first which sister I was trying to represent.  Half way through the construction I would begin to sense a certain sister’s energy, how it felt to be around her, and hear our conversations. I thought of these boxes as spiritual totems of each sister and at the same time representing universal archetypes.”

Valls states, “In the choreography, the sisters represent links in a long ancestral chain of women who are born in a particular time and place – 1950s Louisiana - and who share the experience of being part of a “collective,” one of seven children. I had fun creating dances for the victim, the princess, and other stereotypes of the archetypes that dominated that era.”

Film maker, Deborah Schildt of Alaska Film Services is contributing film to the project. She is combining film clips she shot in China, Mongolia, Louisiana with video clips of the dancers and archival film of the Beaullieu family.  Deborah had full control of selecting moments from the 63 rolls of 8mm film strips of the Beaullieu family. She saw the potential of a quick kiss become a long engaging scene by slowing down the timing of the images and layering them with music and sounds. She has worked throughout the U.S. and Canada on productions in Cuba, China,Europe, Jamaica, Mongolia and Siberia.  Schildt’s film credits include eight years in Los Angeles as an Art Director and Production Manager working on feature films, television series, and commercial productions.  Her short documentary titled “Boodog: How to Roast a Mongolian Marmot” won the best short film award at the Flagstaff International Film Festival 2007 and is being screened at festivals nationally and internationally.

The cast of dance performers include Toni Valle, who presented her evening length concertCRACKED at Diverse Works in December of 2006;  Kara Ary and Jennifer Magill of Travesty Dance Group,  Corian Ellisor who presented choreography at the Big Range Dance Festival 2007 and A Weekend of Texas Contemporary Dance; Mechelle Flemming who recently performed at the Cunningham Dance Studio in NYC with Theresa Chapman and who presented a new work in March of 2007 at Diverse Works- 12 Minutes Max;  and Stephanie Rodriguez and Joani Trevino of the San Jacinto Community Dance Collective who performed Valls’ choreography, Static at SJC in May 2007 and Suzanne Oliver’s choreography in June 2007 at the Bill Evan’s Summer Institute in Brockport, New York. 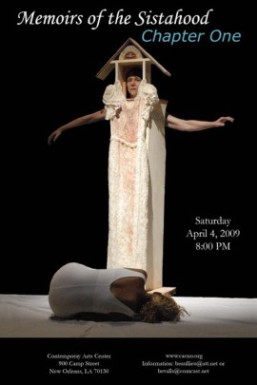