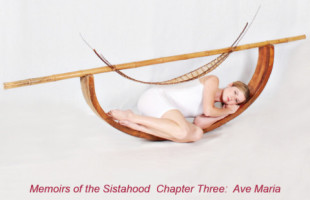 By Linda Dautreuil
www.nola.com
Growing up in a Catholic family in the 1950s was an experience shared by a large number of people of a certain generation in South Louisiana. While many recollect the experience, few explore the complexity of family relationships touched by an apostolic faith with a special devotion to the Blessed Virgin Mary.

Who better to do so than two sisters with gifts in the arts of movement and three-dimensional form: Houston choreographer Becky Beaullieu Valls and Mandeville sculptor Babette Beaullieu. These two of six sisters and one brother, grew up in the small but colorful community of New Iberia, where their father was a doctor and their mother managed the household and family.

From this fertile brew in southwest Louisiana, west to Houston, and east to New Orleans, “Memoirs of the Sistahood Chapter 3: Ave Maria,” reaches the stage of the Contemporary Arts Center, 900 Camp St., New Orleans, on Saturday at 8 p.m.

Two prior performances, “Memoirs of the Sistahood Chapter One, 2007,” and “Chapter Two: House, 2009,” premiered at Houston’s Diverseworks, and later in New Orleans at the CAC.

Audiences first encountered the six Beaullieu sisters and their archetypes in these performances. Layering images and narratives with choreography, the Beaullieu sisters explored the terrain of family life in shared and private spaces, the interior and exterior of relationships between parents and children, siblings, family and home. The influence of religion on family life emerged with references to Catholicism, integral to the coming of age process for the Beaullieu sisters, but universal in exploring relationships between the human and the divine.

“Memoirs of the Sistahood Chapter Three: Ave Maria,” with film by Deborah Schildt, is a study of motherhood, the Blessed Virgin Mary, and the role of mothers and daughters as they come to understand the significance of belonging.

The interaction between the dancers and the sculptural structures onstage is important in all of the performances. In “Chapter 3,” the presence of sculptor Babette Beaullieu pushes the interactive dimension even further as she processes a variety of mediums, weaving and layering symbolic objects and materials in the creation of a sculpture onstage. This extemporaneous act of creation establishes another layer of connection between art and life, both physical and spiritual.

The major collaborators are all artists as well as educators, with professional records of achievement. Becky Beaullieu Valls is an independent choreographer in Houston and assistant professor of dance and director of the University of Houston Dance Ensemble. She is the director and choreographer of Becky Valls and Company, a performing group with Young Audiences of Houston, integrating dance and science through performance.

Babette Beaullieu is a studio sculptor who lives and works in Mandeville, where she teaches advanced sculpture in secondary education in the St. Tammany Talented in the Arts Program. Her art career began after years in the marine industry, where she came to regard her boatbuilding and sail-making as the beginning of her interest in sculpture. She studied art in Europe and traveled throughout Bali, focusing on textile production and wood carving.

Deborah Schildt currently lives in Alaska, but she has traveled to Louisiana in her documentary film endeavors. Schildt spent a year doing graduate studies in film and teaching for two years at a private arts school for children in Vancouver. She wrote, shot, and edited an award-winning 16mm documentary film, “A Sense of Loss,” which was broadcast by CBC nationally. She is a founding member of The Alaska Film Group, a nonprofit trade association of film and video professionals in Alaska.

For more information about the performance of “Memoirs of the Sistahood Chapter 3: Ave Maria,” visit www.cacno.org. Tickets may be purchased in advance: $20 for the general public; $15 for members of the CAC