From the piles and refuge of Hurricane Katrina, Babette salvaged lost doors and windows to construct six boxes. These “altar” pieces have become the foundation of a series of performances (2007-2013)  titled Memoirs of the Sistahood, a collaboration with sister/ choreographer Becky Valls of Houston and  Deborah Schildt, film maker from Alaska. The series is a visual form of non-linear storytelling with evening length “chapters” about women, family, home, and religion.

All six boxes are used in Chapter One representing the six sisters in their family and their archetypes. In Chapter Two four boxes suggest the interior of a home, and in Chapter Three: Ave Maria, three boxes signify the Trinity.

In Chapter Four the sisters explore consumption- the things we collect, destroy, and leave behind. The six boxes form a house, our biggest possession, with the stuff we accumulate and carry.

The Trail of Dresses, as seen in the art installation, are our human remnants which create sacred pathways - tracing our history, connecting us to where we have been, showing us what has passed from our lives, and bringing us forward.

Babette Beaullieu and Becky Beaullieu Valls will be performing Trail of Dresses in Going Dutch Art Festival in Chicago on July 29 & 30. The dance is based on Memoirs of the Sistahood - Chapter Four: Sacred Trails which was performed at the Contemporary Arts Center in New Orleans. The  work was centered around Babette's art installation and performed by Babette, Becky, and Toni Valle.

In New Orleans, Babette ritually built a trail of dresses and objects on the floor. She explains “the impermanence of our possessions creates a trail of human remnants that trace our history and connect us to memory. In this state of transience, we observe what we are carrying forward and what we are leaving behind.” For Chicago, Becky is choreographing a companion piece that works with the building of the trail of dresses using ceremony, and gesture. “I use gestures that are quirky and rhythmically dynamic to expose personal nuance and reveal private meaning.”   The overall work deals with transition – constructing and de-constructing- through the building and manipulation of objects in space. Babette will be exhibiting three of her sculptures in the Going Dutch Art Show. 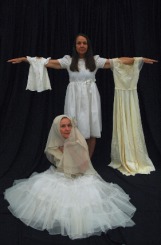